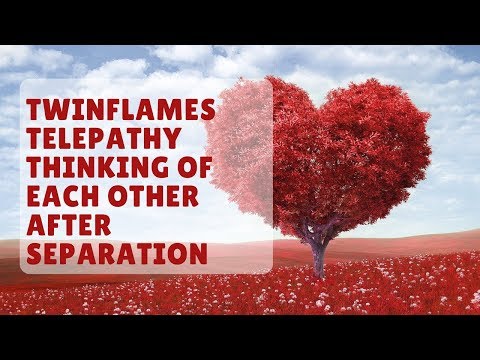 Me and my twin flame have been separated for a while.

My belief is that when we need to meet each other –  we gonna
meet each other and there’s nothing I can do about it.
I just need to let it go, and it’s after there’s probably
some issues they need to solve.

He told me that he’s not available to meet and to see me, so I have decided that I should move on with my life.

I’m trying to keep me busy at work, with my house, my family and everything.

Today I want to talk to you about Twin Flames telepathy.
I woke up on Saturday morning and he was in my mind like I felt him.
Even right now when I’m thinking about him I can just remember how I’m lying next to him,  putting my head on his chest and it feels so real.

It’s like I can feel his energy like he’s near me.
Being with these emotions, I kept myself from texting or calling him
all this week.
I felt him very strong and on the lunar eclipse that we had on
January 31st, I knew that I should be letting him do his work and to have
the path that he needs to go through, in order for him to have a change.

I have found myself keep chasing and I know that nothing’s gonna happen
for me.
So for my own good, so I should just move on with my life.

I spent the day with friends on Saturday morning and with my family, and I was thinking about him so hard all the morning and it’s really crazy that all of a sudden around 10 am, a text message appears on my phone – “How are you? How you doing? are you feeling okay?”
I was shocked – I didn’t rush into answering, so I answer
him later and told him that everything is okay and that I’m hanging out with friends.

During the day we exchange some messages, but nothing was too much, but he said he was thinking of me all morning and I could feel that.

Today this morning I just woke up and I could feel him thinking about me and I
even dreamt about him last night because I felt his presence when I woke up and it happens to me quite a lot.

So if you got your tweenflame, you can just think of him and you don’t have to be together next to them.
Some people say that you just need to talk to them like their next to you so that’s what I’m doing.
I’m talking to him and sending him a lot of love , light and energy and I know he
can sense it, and I know that when he’s talking to me it’s like everything is
the same between us, like we were still together.
It doesn’t matter what we say to get on now.

We will love each other unconditional love.

I know  it’s a really nice thing, all these stuff you can have in your twin flame
connection, because you can feel each other.

When we are together and we’re talking, it’s like we complete each other
sentences and it’s like I’m feeling him as a part of me.

I know how he’s feeling right now and I’m not sure that he has it on
the same level like me, because I’m quite more spiritual.
Though, it’s a nice thing to know that there’s someone out there
in another place, and  he can feel you.

I really hope to see him again,
and for now we are  in some sort of separation but it doesn’t feel like separation since I can feel him so badly and I’m just waiting to see what’s gonna happen next and give the universe the chance to do his thing and I really hope it will get me back to him.

While I was thinking about all this thing, I know that I need to solve some things with myself.
It’s like some issues from my past with my ex that came up to the surface and today I realized that I need to close everything in order to move on.

There’s a part of me that thinks that I might never love again the way I love him, and that I’ll never feel loved like he makes me feel, but writing these lines now, I know that this separation was exactly what I needed and that this man, wasn’t my true twin flame, he was just a soulmate.
3 months later after uploading this video I have met the one that I think is my true twin flame.

And still, with soulmates and twinflames, there’s a lot of telepathy going on, and you can share your thoughts and emotions, just be open to that.